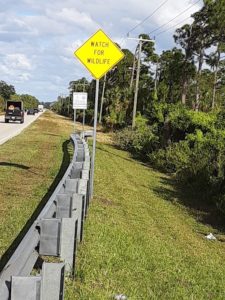 opossums killed between January and September of 2020.

The discovery of a rate of mortality along this road was noticed while doing preliminary work on the “Loxa-Lucie Headwaters Initiative” to preserve land in the headwaters of the Loxahatchee and St. Lucie rivers, according to The Guardians of Martin County Executive Director Greg Braun.  Data was compiled to mark the species and location of the places where the animals were found.

Why the carnage? Braun has several theories to explain why there are so many dead animals along that stretch of road. Wetlands on both sides of the road are part of a corridor animals use to move from the protected public lands of Jonathan Dickinson State Park south of Hobe Sound and Atlantic Ridge Preserve State Park southwest of Stuart.
“Bridge Road crosses the corridor,” Braun said, “and the animals are hit as they cross the road.”

“That’s why the mortality numbers jump up during the summer,” Braun said.

It’s hoped the new warning signs will alert drivers to be extra careful and to keep an eye out for wildlife who may be crossing the road.